Notice: class-oembed.php is deprecated since version 5.3.0! Use wp-includes/class-wp-oembed.php instead. in /www/wp-includes/functions.php on line 4802 Black Glasses Poster Campaign ~ Kelcy Parrish Design 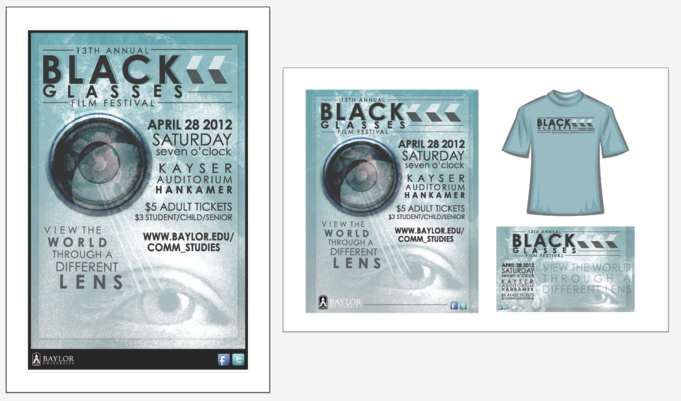 Every year, Baylor University’s Film department hosts “The Black Glasses Film Festival,” and every year they hold a poster competition for local designers and students to compete for the chance to have their design chosen as the face for the festival that year.

Being a natural competitor, I was in it to win it all.

My initial design for this poster is far from what you see now. The direction I wanted to head in first was more of a play on the visual reference of “tickets” – like movie tickets, or musical tickets – not so much about the film festival itself.

After gathering some constructive feedback from mentors and fellow designers, I decided to scratch the entire thing. With 2 days until the competition deadline, I found myself back at square 1 – looking at a blank canvas with no new direction in mind.

I’ll never forget that day. I canceled all my plans and parked my laptop and myself at a tiny Starbucks table unmotivated to leave until I had at least a new idea or direction to go in for this Black Glasses poster.

I took a giant step backwards, but in doing that – I found a completely new perspective.

I took a giant step backwards, but in doing that – I found a completely new perspective. I started imagining myself as one of the members of the Film department. Once I put myself into the clients’ shoes, I finally found that “ah-ha” moment with a new found direction to take my design in. I kept coming back to the word “vision” and how that could resonate with the client and multiple audiences who may happen upon this poster. So, I created a tagline for the film festival, “See the world through a difference lens” and that changed everything.

So, I created a tag-line for the film festival, “See the world through a difference lens” and that changed everything.

Results: My poster was the chosen winner and was carried out through a flyer, mailer, and t-shirt design. This design also won a Gold ADDY award. This piece also went on to win Best In Show in the student division of the Waco ADDY awards.